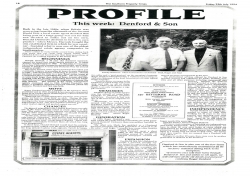 In the Southern Property Times on the 29th July 1994 a profile publication featured a Southampton based, family run business, surviving and developing in a changing industry. Unlike many of its contemporaries that business continues to thrive, and this year Denfords Property Management celebrates its 70th anniversary. The second generation of this family, Roger Denford reflected on the journey that the business has been on and the steps taken to remain a constant in the South Coast property sector.

After serving in the RAF during the war, my father, Donald Denford returned to Southampton and became a partner in Pring & Co. estate agents, in Stag Gates House. In 1947 the senior partner in the firm decided to sell out to Harrods of London. Mr Denford was against joining the London firm and in 1948 he opened an office in The Inner Avenue, Southampton, trading as Donald Denford F.A.I Auctioneer and Estate Agent. After several years of hard work establishing the business, the firm moved, in 1955, to larger premises in Cumberland Place.

Upon entering the work force I completed my training with a firm of chartered surveyors in Fareham and when qualified I joined my father in 1960, when the business was renamed Donald Denford & Son.

In 1969, in order to gain a shop front and to compete with other firms, it was decided to move to London Road. The firm continued to prosper while I added surveying to the original core business and offices were opened in Chandlers Ford, West End and North Baddesley and in 1980, my son Paul joined the family business.

In 1990, at the grand age of 84 years, my father was persuaded to retire, having spent over 60 years in the profession and in the business he established.

In 2006 it was decided the time was right to adapt the business model once more and sell the London Road premises and the Estate Agency and residential letting side of the business to Goadsby, who were looking to expand into the Southampton area. The block management side of Denfords business having expanded rapidly under Pauls direction moved to Millbrook Road East and was renamed Denfords Property Management, with Paul Denford becoming the senior partner.

In 2016, I retired, having been in the profession for 56 years. The firm has been in business for over 70 years under the control of three generations of the Denford family, always being supported by loyal and experienced staff, many for a great number of years.

Focusing solely on residential block management, Denfords has weathered the storm that other parts of the property sector did not encounter so favourably. With no active marketing Denfords has grown organically and local changes to the marketplace have seen the client base grow recently as customers seek a friendly, personal service to protect their homes and their investments.

Looking to the future Paul Denford surmises that the residential leasehold sector is currently in a state of major upheaval while the leasehold reform is underway. As the government decides how to bring about much needed change to the industry we will continue to apply the business principles initiated by my grandfather in 1948 so that customers have a local service provider to turn to for consistency in times of change.

We were established in 1948 as a general practice estate agency and chartered surveying firm.

We are a member of The Property Ombudsman scheme.

We are corporate members of the Association of Residential Managing Agents (ARMA).